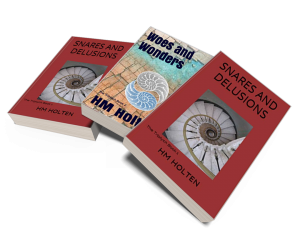 Snares and Delusions, The Triptych Book 1

Dreams and nightmares take Hedda to hell and back.

The combined forces of opium and pain bring her face to face with her life. From rural Sweden in the late nineteenth century, over Silkeborg to the Danish Capital, and during the Great War, she experiences love and loss, poverty and betrayal.

Hedda gives up everything to win independence. She soon discovers that this is one thing to wish for, but another to achieve. Life handles her roughly, but can she develop strength of character? Will she pay for her freedom in ways she doesn’t anticipate?

Format: PaperbackVerified Purchase
Such a wonderful book. I really love Hedda. She is such a lively character. But the story has so many interesting characters. People you really feel like you just know. And the drama of it all was truly moving. I look forwards to reading more from HM Holten.

Spacemonkey
5.0 out of 5 stars
Truly magnificent and vivid!

Format: Kindle Edition
I truly enjoyed this book. The writing style is detailed and is teleporting you directly into the story and its surroundings. Following the wonderful character, Hedda on her journey is vivid. The author “Holten” wrote a truly magnificent book and for that, she deserves my 5-star rating! Go for it! You will love it! ~Jacqueline Pirtle

Here’s the newest review for Snares and Delusions:

The Gift of Sight

We begin with a narrative frame of a woman on her death bed, seeing her life in vignettes and scenes. The time is far different from ours; assumptions are made concerning all the rules of love and marriage, motherhood and livelihood. Not every scene or conversation is a stone in a grand story-arc. But every conversation, every scene, serve as brushstrokes to the final picture of the dying woman’s life.

Hedda Gullberg is a survivor. Not a burned out anti-heroine indifferent to pain, whether hers or another’s. Nor a supergirl able to throw groping men over her shoulder. She is a bright young thing (plays the harmonium, can sew lace) with one super-power: the gift of forthrightness. She sees things are they are, and does not work to pretend she sees anything else. And early on she sees: the path her family pushes her down is destruction. Later she will come to see that the path all women in the 19th century are pushed down is destruction. But Hedda has a flame of defiance that gives her the strength to march the other way. Or run, when need be.

On occasion, her sight gives her strange visions; of life through other eyes, of magical folk, of secrets beyond this world. Interesting; but she has no time for magical visions. And they matter little to the story. They are mere side-effects to the clarity honesty . Hedda doesn’t lie to herself about what she sees, feels. And so we are present with that dying woman, seeing her . Ordinary things of keeping a house, aiding strangers, raising a child, knowing the value of love and friendship.

Holten calls it ‘Snares and Delusions’; but it isn’t all dark vision. Hedda, in her final is seeing light and joy as well. There would be no point the unless there were some goal to be reached.

This is a book that kept surprising me.

Woes and Wonders, The Triptych Book 2

Hans wants family and stability, but the Great War tears him away from home and propels him to China and a Japanese POW camp.

Ellie dreams of love and fairies but must face disappointment and a finishing school. The Great War is far away. Still, beneath her secure world hide secrets and lies.

When they meet, their love of music brings them together.

Can Hans overcome the scars he brought back from Japan? Will Ellie find happiness, or will Hans’ demons crush her dreams?

Is it possible to create a family in the depression between two world wars?